Under the new policy of the Gujarat govt., to develop small-scale distributed solar projects, state is committed to benefiting from solar projects ranging from 0.5MW to 4MW. The policy will hold true for projects installed in barren land parcels with the aim of encouraging cleaner energy in the state.

Efficient solar components make efficient solar plants. With a state like Gujarat, where the irradiance is high, this is just the kind of opportunity you would like to cash in! And we have just the right solar inverter for you. We, Banga Solar are the solar wholesaler and distributors for Solis inverter India.

Solis Inverter manufactures Solis-255K-EHV-5G which offers you a DC/AC ratio as high as 1.5%. Relax, you won’t miss out on utilizing the best of your module. With intelligent fan cooling that saves your inverter from heating up, it is also suitable to an altitude of 4000m, keeping your worries of coverage at bay!

The best time for investing in solar was a decade ago when this industry had just opened its eyes. The next best time is NOW! And the entire ball game is ground the solar panels and solar inverters. A performing solar inverter keeps your solar plant healthy and wealthy. Having said that, let's understand the working of a solar inverter.

A solar inverter converts DC into AC, maximizes power output with the help of MPPTs, communicate the performance of PV plants, shut down in case of faults. Solis inverters have 14 MPPTs; in layman terms, MPPT tracks the maximum point in the event of low light. Since solar is very dynamic in terms of generation, MPPTs help to track the maximum power at the given voltage levels. In short, the more the number of MPPTs, better the inverter.

Solis Inverters use RS485 for connection between Solis inverters. Both RS485 and PLC can be used for multiple inverter monitoring. There are 5 communication terminals on the inverter, one of which is reserved for Wi-Fi/Cellular data logger. It's economical since it supports aluminum cable that costs cheaper than the copper cables.

Solis inverters offer intelligent string monitoring where each string will be scanned that would help detect or reduce string related losses like mismatch loss, single-cell failure, overheating, etc. The inverter is made keeping in mind the evolutionary curve of the solar industry which is exponential in some capacity. These solar inverters support bifacial modules of wattage higher than 500W, which is half a kW. These modules are high-temperature tolerant and provide a higher yield. So, let the magic begin! 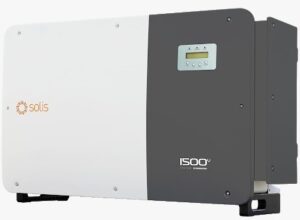 Summing up the beauty of this inverter, it is an inverter with Smart grid compensation algorithm, from “Passive Adaption” to “Active Support”, high DC/AC ratio, low LCOE, and expandable Storage Interface. Due to these characteristics, Solis 255K inverters have been installed in World’s largest Tidal-flat 300MW utility PV plant and other most iconic buildings and projects. The 8th Edition of ‘India Rooftop Solar Congress 2021 Awards’ which is the most prestigious recognition for the best performers and achievers in the Solar Industry. Solis was the proud winner in the award category Company of the Year: Inverter (Smart Technical Inverter).

Banga solar with experience of 11 years and is based in Gujarat is well-versed with the tides of the industry. With great customer services and affordable prices, it can make your solar dream a reality as good. Also,  with coverage across PAN India, worries related to delivery and maintenance are a thing of yesterday.

Banga Solar was established with a vision which is aligned with the vision of the Indian govt. and the state government and believes in promoting solar as their bit of commitment towards the environment. This solar company aims for longevity in the industry by gaining the trust of its customers. It works with reputable manufacturers to add depth to the industry alongside its own ambitions of growing as one. With Banga Solar, you cannot go wrong!

And so, with Solis inverters! A product of Ginlong Solis which was established in 2005, is today the best manufacturer of solar inverters has won many awards to its name. This manufacturer scored an AAA rating for the most bankable inverters, which has led to easy loans, and a great return on investments for its products. A second rank holder in global shipments for string inverters, it has come a long way in the solar industry.

Choose Solis and Banga Solar and extract maximum out of this relationship as Banga Solar transfers all its privileges received from the Solis, Solar company to its customers. A process-oriented team, that will offer a plethora of options for payments, so that finances do not overburden you either! That’s how we like to work- cleanly and happily.

Choosing solar is a gift to oneself and the generations to come in this time of pollution and declining fossil fuels. Going solar is like keeping an umbrella handy when you are sure of the rains. And rains there will be, as we move towards the future. We must be accountable for our presence and reduce our carbon footprints as a sense of responsibility towards nature. Thinking rationally, solar is also a protection against rising electricity prices since fossil fuels are on a decline. But, come what may, we will sail through as long as we have our very own Sun above our head. With this spirit, join hands with Banga Solar!! For sales call on 1800 890 3051; for services- 1800 890 3053.

Speak to an expert Request a call back to discuss your needs.

Let us analyse your electricity bills to find the best solar panels and system for your household or business.
Call 1800 890 3051 or use the button below to request a call back from one of our friendly consultants for an obligation-free chat.

If you would like to speak with someone directly